Greetings, I hope everyone is staying safe and sane in these whacky times.

With the onset of Summer and all that entails, painting progress has been slowed considerably.  I have managed to free up a little painting time.  I almost have enough new units painted for the next installment in the Cheese Saga.  I've also had to do some substitution to the forces the Earl will field in the next battle as at the moment I'm trying to do this using only figures already in the lead pile.  Once this Cheesy tale is resolved, will see who the next rulers are to get involved.

Below are the rather limited results for almost a months worth of effort.

First up in your basic unit of Spearmen.  The original concept had the Earl's forces consisting primarily of Spearmen, a few Swordsmen, and bow armed missile troops.  Unfortunately the lead pile didn't completely cooperate with the plan. 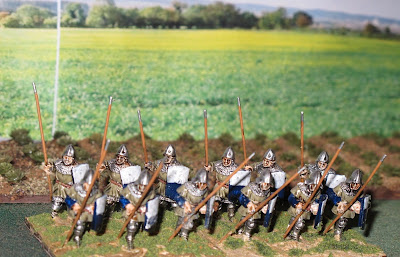 Figures are Old Glory
Would it really be that difficult to sculpt the figure with a hand that makes it easy to glue on a spear?

The next two units of Sword and Bucker will fight on the Earl's side in the next battle, but their long term home is in the forces of Lord Calvin of Hobbs, or Great King Calvin of Hos Hobbs as his adorning subjects often call him.  They are painted in the colors of that kingdom.  Figures are Old Glory 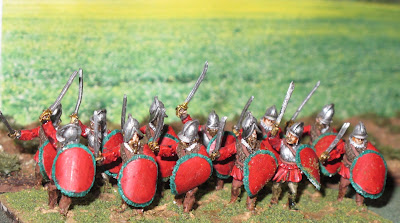 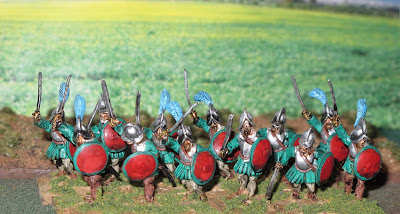 I think I prefer the green clothing and plan on using that when I get around to the Pike Units.

As of now the only unit left is an Extra Heavy Knight unit for the Earl, and then it's time for another battle.