In my last post I mentioned still wanting to do a Tony Bath Hyboria style campaign, vs. a traditional Lace wars ImagiNation campaign.  That got the old brain cells working and I remembered that at some point last year I had started working on a map of the to be named world before I overwhelmed myself with complexity and shelved it.  After some digging through the computer files I managed to locate the below.  It’s not much of start, so far only 2 Barony’s? Warlords?  Realms?   Whatever they end up being called.  This is clearly still a work in progress. 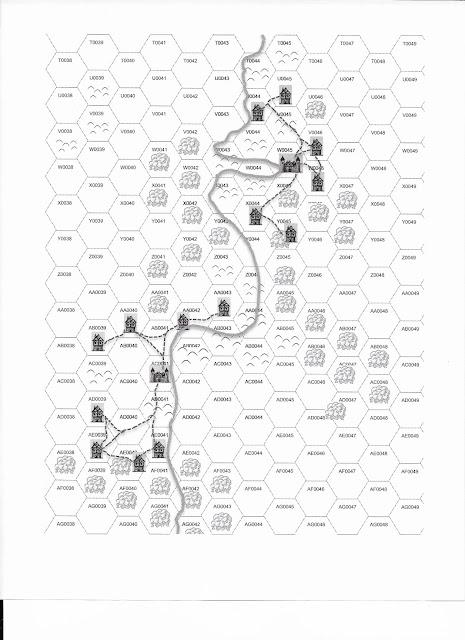 Sorry about the poor quality and lack of color.  Blogger wouldn't let me upload a PDF, and my printer needs ink, so this is the best it gets.   The building icons are color coded to indicate 'country' and of course river is blue, roads (dashes) are brown, woods are green, etc.  And if i don't post this now it could be another year before I get around to another post :-).

The grid is in Excel, which allowed me to write a simple formula to populate the hex numbering system.  The section below is situated in the north central region of what was planned to eventually become a continent.  If we use the European model, the Castles represent the ‘Lord/Baron/Count, what have you, the houses would be the Manor House/Village of their Vassals. (The building icons were found on line at https://www.deviantart.com/tomdigitalgraphics/art/MedievalTowns-561264510), the hills, forest/woods, are also from the web but I don’t recall the source.

When I last worked on this, the scale was to be one hex = 5 miles. The original thought was that a force comprised of only Infantry could move 3 Hexes (15 miles) a day due to the need to forage.  With a weekly move maximum of 18 hexes to factor in time to rest, etc. A force that includes cavalry could move 4 hexes a day and 24 hexes a week as the cavalry is assumed to take on the foraging duties.  The plan at the time was to have a campaign turn represent one week.

I originally went into excruciating detail on what was in each hex with the intent of having a stand alone Atlas that detailed each hex similar to Warplan 5x5.  Hex’s with villages would have one predominant attribute, hills, farms, pasture, woods. The brownish dotted lines are roads; actually little more than cow paths is how I envision them at this point.
Hills and mountains had a chance of mines being present, with the specific type of mine randomly determined.
Farms would provide additional bonuses in the event of a siege or increase supply radius.  As well as potentially have a positive impact on population growth (but I never made it to the population growth phase before it all got too complicated).
Pastures would be randomly determined to be cattle, horses, or sheep, and would provide an additional light cavalry unit.
Woods would increase revenue through fur trade and provide an additional longbow unit or a skirmish archer unit.

That quickly became overwhelming and confusing even to me, so the project languished for most of last year after that.  And I didn’t even get to the income, manpower, troop supply, and a whole host of other items that would have further complicated things. So, for now I think I’ll scrap most of that although I like the concept of additional units based on terrain, so that may stay, or not.
I think I can still use the map as a starting point, and find a way to simplify the book keeping.  It’s all just a matter of time and motivation.