Wow, it's been almost a year since the last post, pretty unacceptable.

For my American readers (if I have any left) I have a quick quiz, how many of you knew that there is an official American's Creed?  The American Creed was written by William Tyler Page in 1917, and was approved by the U.S. House of Representatives on April 3rd, 1918.   Being astute wargamers I'm sure most of you recognize those dates correspond with a major wargaming period, although not one I partake in.

I believe in the United States of America, as a government of the people, by the people, and for the people;  whose just powers are derived from the consent of the governed; a democracy in a republic; a sovereign Nation of many sovereign States; a perfect union, one and inseparable; established upon these principles of freedom, equality, justice, and humanity for which American patriots sacrificed their lives and fortunes. I therefore believe it is my duty to my country to love it, to support its Constitution, to obey its laws, to respect its flag, and to defend it against all enemies.— William Tyler Page, The American's Creed

It's hard to believe almost a year has passed since the last post. Clearly, I've been having some motivational issues as it relates to the hobby.  But I think I'm starting to get back into the wargaming groove.  With Historicon on the horizon less than 2 weeks away, and having recently gamed locally,  I had a surge of painting energy (well, at least what passes as a surge for me).  I can tell it's been a while since I picked up a brush, the quality is lower than my normal efforts.    These are all from the vast lead pile, which I really hope (need?) to whittle down later this year.  All figures below are Front Rank with the exception on the Romans, which are Black Tree Design.

First up, the Vilna Infantry, the painting was completed last November, but I didn't get around to basing until last week. I continue to slowly chip away at the ultimate goal of completing the 2nd Army of the West, based on the OB at Borodino. 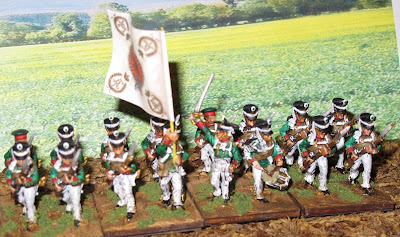 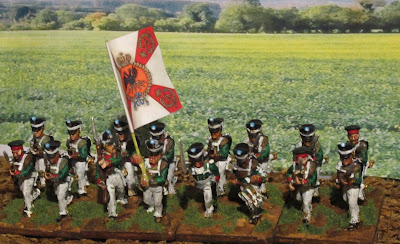 Another Jager Regiment, just completed over the weekend.  They were photographed in natural light, I'm not sure why they look so washed out, they don't look that pale in the flesh... err, I mean in the lead. I'm also not sure why I couldn't get them in focus no matter what I did.  Maybe it's their stealthy Jager green uniforms blending in to the background?

After the last campaign game I determined that maybe the problem my Dragoon's have is that they don't have a properly attired  commander.  So, after a 30 minutes search through the various lead stashes (it's harder for the Czarina to tell how much unpainted lead there is that way) I found this guy.  Hopefully his leadership and dashing dragoon outfit will inspire my Dragoons to greater glory. 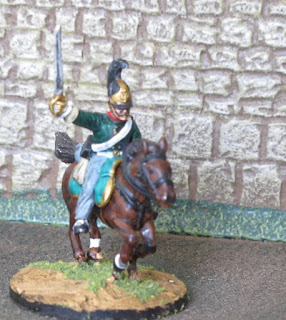 And lastly, going way back into the lead pile, some Black Tree Design Romans that I bought in either 2005 or 2006 during one of their too good to pass up sales.  Sadly, these are not the oldest lead I have laying around, but it stills travels back in time a long ways.
I really like the figures and how the Testudo looks, although I'm not sure it will ever end up on the gaming table, and if it doesn't no big deal, Romans are quick/easy to paint. 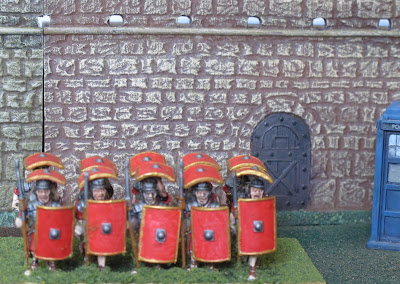 That's it, hopefully there will be another post this year.  I hope everyone here in the U.S. has a great 4th of July.  In honor of the day, I leave you with the words of the Sons of the American Revolution (SAR) Recessional:

Until we meet again, let us remember our obligations to our forefathers who gave us our Constitution, the Bill of Rights, an independent Supreme Court and a nation of free men.

Some much lead, so little time.