Call out the Garrison

Following the battle in the last post, the Earl is busy organizing his troops for the campaign to retake Bridgeton.  Which means, time for me to paint up a bunch more troops.  Note to self, if you ever try to do something like this again, make sure you paint a LOT of units up first.

Unfortunately the painting motivation is lacking, so after a month, there hasn't been much progress.  Below is what I've managed to do to date.

First up, to address my shortfall in command figures, a new commander takes the field in his freshly oiled armor. 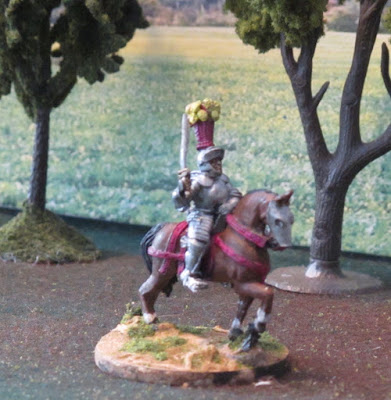 Next up, some additional firepower.  The Earl prefers the tried and true approach instead of that new fangled and expensive gunpowder stuff.

Here we have the Red Cowled Crossbow men. Figures are Old Glory (I think)

And the Blue Cowled Crossbow men. Figures are Old Glory (I think)

And as the Earl prefers the good old fashioned bash them in the head and slit their throat approach to settling disagreements, a unit of Swordsmen.  Figures are Black Tree Design. 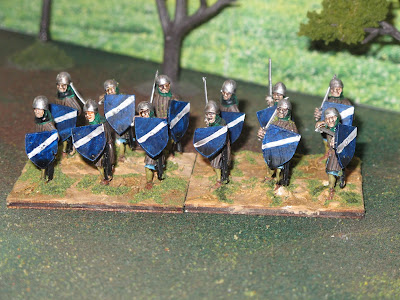 And here they all are.  Looks like I need to expand the background a bit before the next round of photos.

Now I just need to paint another unit of Spearmen or two and a sword and buckler unit, maybe a Levy unit with various melee weapons, and the extra heavy knight unit and I'll be ready for the next installment.