As some of you may be aware my Russian Dragoons of the 4th Division have accumulated a less than stellar record on the battlefield. In the 3 games they’ve participated in they’ve only managed to keep 1 of their 4 Regiments on the table in one game, in 2 games they all routed by games end. In their defense, in all of their actions they have been used in a very aggressive manner, and have even achieved limited success, before routing like a bunch of scared little school girls. And I was only commanding them in one battle, so it can’t all be my fault. Clearly, the Czar is not impressed.


The offending units have been threatened with E-bay, but they still continue to rout of the table. Since that had no effect on their performance (clearly it’s the troops, not the commanders that are at fault) I’ve settled upon the most sever punishment I can think of for Cavalry… they have been unhorsed, and will be forced to fight dismounted!  (Admit it, you know the figures have a mind of their own)

I know the above, is a long way to go to justify buying dismounted Dragoon figures, but I like the narrative. Plus I couldn’t resist the Steve Barber Models figures (available thru http://www.triangleminiatures.com/ ). I really don’t need these; in fact I’m not sure if I’ll ever actually use them. But I like the sculpts, and they painted up very easily.

In addition to the below, I’ve also completed the Czar (Emperor) Cuirassier and will post photos once I finish the bases on them.  Hopefully there will actually be a Historicon 2012 for us to run our Borodino game at. 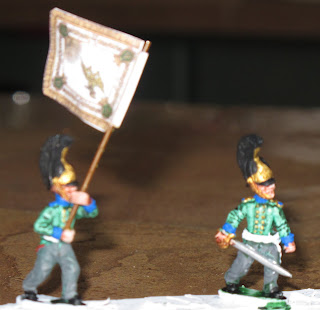 Command figures (sorry about the slightly out of focus photo)