Just a quick post and photo update.  Below is the 'finally' competed Polish Uhlan Regiment, which is the last of the Cavalry units that I have to complete for Historicon.  I may end up doing another Cossack Rgt, time permitting, if not, my Hungarian's make a good stand in.

Sorry about the photo quality and all the clutter in the background.
In addition to the above I've also finished 2 additional Infantry Battalions of the Duchy of Warsaw, leaving me with just one Polish unit left to paint.  Then it's back to Russian Commanders and a Battery or two of 6 pounders.  Next weekend I start boxing everything up by unit, to make sure I haven't overlooked anything.  As of now, I'm feeling like I should have everything done that needs done.

As of now the only thing I'm aware that we are short of for Borodino is one unit of Opolochenie.  At this point, we'll probably just reduce the OB by one unit, I seriously doubt that one unit of crappy infantry will make or break the game.

It’s been a while since the last post.  Painting continues, photos to follow shortly once I find the camera.  Below are some random thoughts since my last post and a bit of a rant.
D-DAY
First of, I failed to get around to doing a D-Day post last Wednesday.  As General Dwight D. Eisenhower said 68 years ago:
"Soldiers, sailors and airmen of the allied expeditionary force: You are about to embark upon the great crusade, toward which we have striven these many months. The eyes of the world are upon you. The hope and prayers of liberty-loving people everywhere are with you…”
A truly momentous undertaking, sadly, most of the survivors are now gone.  The last of 3 members of my extended family that took part in D-Day are now gone.  One hit the beaches, one parachuted in, and one flew a Glider in.
I don't think the world adequately appreciates what these young men did 68 years ago.
On a much lighter note, as some of you know I work in downtown Manhattan, which means I get a good dose of the big apple craziness.  I take a certain perverse pleasure in observing the contradictions, and putting a Nebraska farm boy perspective on them.  I recently passed a battered, pale blue, Van with no windows, and big bold letters on the side proclaiming “NYC DEPT. OF MENTAL HYGIENE”.  Now maybe it’s just the quirky way my mind works, but when I think Mental, I think ‘Brain’, and when I think Hygiene I think “Washing”.  Put the two together and you get “NYC Department of Brain Washing”.
Then I had this image of the memory implant machine/chair from the 1990’s movie Total Recall being housed in the back of the van and unsuspecting citizens being forced to have their thoughts modified and leaving the Van mumbling,  “20 oz. Soda is bad, Salt shakers are bad”.
This could explain a lot.  Now, move along, nothing to see here, move along.
I think with a little work this could get spun into an interesting background for a pulp fiction type of miniatures game.  Joe, you have pulp fictions rules, right? 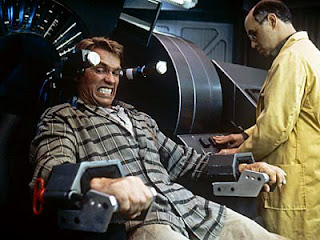 Zombies, OMG, WTF.  Forgive me for making light of a couple of really terrible incidents that happened in the ‘real world’.  But as a society how the hell did we devolve to this level?
As I’m sure everyone is aware the last week or so of news has been filled with stuff right out of a bad 1970’s Horror flick.  A person high on Bath Salts in FL eating the face of another man like a bad Zombie move.   The Baltimore, MD College student that killed his roommate and ate his heart and brain.  The Gay Canadian Porn Star Cannibal (some of this stuff you just can’t make up) that they finally caught in Germany.  And lastly, there was a female shoplifter in CT that took a bite out of a man’s bicep and spit the mouthful of flesh back in his face.
Now I’m not really up on the whole Zombie thing.  Fortunately I have a couple of 20 something (kids) that work for me and over the last week they’ve tried to bring up to date.  So, I’m a little bit aware of the current Zombie ‘thing’ in the Movies, and the Television series, but WTF.
Maybe this is the ZOMPOCOLYPSE?  This could be the excuse to start a new miniatures project?  Anybody know of any Zombie figure manufacturers (GW need not apply).
And finally, protect yourself; learn the stages of Zombification (courtesy of Zombie Squad).
Posted by Czar Barry at 7:27 PM 3 comments: