It’s been a while, but I seem to finally be over my bout of painting burn out.

But first, some non-hobby updates.  I’m still dealing with Sandy’s gift that keeps on giving… no it’s nothing that has to be treated by prescription drugs (get your minds out of the gutter).  My office building just had full power restored last week, and has at least 2 elevators working now.  I assume that means that both I and my staff that have been scattered over 3 states since Sandy blew in way back in October will soon be back in one (hopefully mold free) location.   I’m going to hate adding an extra hour and half back to my commute each way, but it pays the bills.

First up, the Russian Guard Jagers not my best work, but they’re done.  I actually finished these right before Christmas, but I just finished the bases last weekend.

A Bombard battery.  The observant will note these bases aren’t complete, because I need some recommendations from the handful of folks that read this.  Way back when I started my Renaissance Armies I finished my infantry bases in a very basic, paint the wood with a mixture of glue and green paint and dip in railroad turf to flock the base.  My basing has evolved since then, but the dilemma is do I continue to base the infantry the same way for a consistent ‘uniform’ look?  Or do I change to my current basing technique, and have an inconsistent look? (I’m sure at least one of you will say rebase the old ones to the current style – but I hate rebasing). 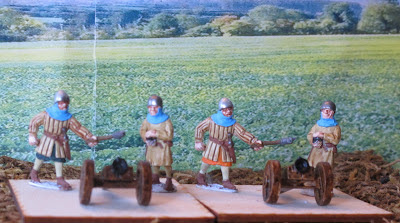 Soon to follow, a unit of Pikemen which are about 60% done so far.

So much lead, so little time
Posted by Czar Barry at 8:13 PM 7 comments: