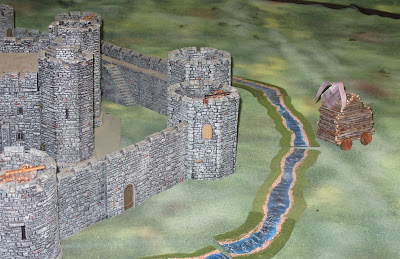 Click to see larger image
It’s been a while since the last painting update. May wasn’t very productive painting wise for me, partly because I allowed myself to be distracted with construction of the above ‘Trojan Rabbit’.


2012 to date painting production on the Russian’s for the Borodino project stands at: 4 Battalions of Line Infantry (64 figures), 2 Battalions of Grenadiers (32 figures), 1 Battalion of Opolochenie and 3 Medium Artillery Batteries (3 stands per battery, 3 gunners per stand). With luck, I’ll finish another 2 Grenadier Battalions Memorial day. Not very impressive results, I know.

Once the Grenadiers are completed I'll post photos of the completed units along with a brief overview of  'Neverenufski' that will Peter and I will be running at Historicon this year.

However, I was able to play in two games this month – almost unheard for me. The first game this week was our second play test of Vauban’s Wars by Eric Burgess. Eric has done a fantastic job with the rules, resulting in a quick playing, fun, and realistic set of siege rules. For more info on Vauban’s Wars check out Eric’s Blog at http://dinofbattle.blogspot.com/and you can find the battle report at Peter’s Blog at http://blundersonthedanube.blogspot.com/2011/05/siege-of-mantua-1796-97-vaubans-wars.html

The second game was the Battle of Graz, June 26,1809. The scenario was from Peter’s soon to be released 1809 scenario book, Blunders on the Danube. I had command of the Austrian forces which only consisted of 4 ‘line’ quality troops, everything else was Insurrectio and Grenz. Unfortunately, I developed a case of tunnel vision on my attempt to block the French relieving force which combined with really poor movement rolls for my ‘line’ unit left the 84th Lines untouched by the time I ran out of Morale Chips. You can find a detailed battle report on Peter’s blog at http://blundersonthedanube.blogspot.com/2011/05/engagement-at-graz-june-26-1809.html
Posted by Czar Barry at 10:08 PM 2 comments: