Projects in the works

Part of the reason for creating this blog was to help keep me focused on painting troops for the Hofkriegsrats 2012 Borodino project. When I first started toying with the Borodino madness the plan was to use 15mm figures. I already had a ton of 15mm Russians and they’re cheap and paint quickly. Unfortunately all the other Hofriegsrats have 25mm figures, so I’m in the process of starting a 25mm Russian army. My portion of the required troops is fairly small. Unfortunately, I’m not a very fast painter (I’m not exactly a good painter either). I’ve made a good start on the Cavalry and a modest start on the Infantry. I have 2 years left to complete the remaining 544 Infantry figures and 80 Cavalry figures.

Of course, the 2012 project isn’t the only one on the radar screen. There is our ongoing “fictional” (think Imagi-nations) Napoleonic campaign. I still need to get around to painting my late war Flames of War American Cavalry Recon Troop. Then I’ve got about 70 Renaissance armored Pikemen I need to get to. Plus I’m being pulled (well, maybe I’m willingly embracing it) into the Victorian world of Space 1889 so I’ll need to paint up a bunch of those figures. And then there’s the 40mm American Revolutionary War project that had a false start a couple of years ago and has languished since then (I still trip over the pile of 40mm lead every now and then). I still need to add a couple of Chariots to my Picts and a few more Roman’s as well.

And finally, sometime around 1983 I acquired a copy of the June 1980 Wargamer Digest which had an article about an “alternative history” World War II campaign. Ever since then about every 4 months I get the urge to start an Imagi-nation World War II campaign… maybe someday.

I think I’ve just depressed myself. Time to stop writing and start painting.

The Hofkriegsrats are a group of (primarily) Connecticut based mental cases that formed for Historicon 2009. For Historicon 2009 we ran 6 1809 games, culminating in a massive Wagram game on a table over 36 feet in length (kind of “z” shaped) and comprising roughly 2,800 25/28mm figures. Hopefully by 2012 we will have all recovered from that adventure enough to run 3 or 4 1812 games, featuring the Borodino blood bath. Plans are also underway for us to run a massive Leipzig game at Historicon 2013. Clearly this behavior confirms the long held belief in the hobby that all Napoleonic gamers are megalomaniacs.

Posted by Czar Barry at 9:36 PM No comments:

Well, so far I’m off to an inauspicious start to the blog.

Time for the obligatory Historicon report: I was pleased with the new venue (Valley Forge Convention Center). The facilities were nice and for the most part cool, in their defense the temperature was 105 when I arrived their Wednesday. My main gripe with the Host in Lancaster was their abysmal air conditioning system. I stayed at the Radisson and the rooms were nice, the staff was pleasant. Unfortunately, for most of the convention only 1 of the 3 elevators was operational. Walking down 10 flights of stairs while being a nuisance isn’t that big of deal; walking up 10 flights of stairs, well, that just isn’t going to happen.

I found the dealer hall and flea market to be rather lacking compared to past years. (Warning rant follows) If you are the exclusive U.S. dealer for a line of historical miniatures why in the world wouldn’t you attend the premier historical miniatures gaming event in the country? It actually probably saved me money since with the current dollar to pound exchange rate it’s actually cheaper now to order direct from the UK and pay the 25% postage then it is to order from the particular US distributor in question.

After nearly 25 years of being in the hobby I finally played in my first Civil War game. The game was run by Dr. Tim Cooper from the U.K. using the new Zouave rules by Bob Jones. Since bob wrote the original Piquet rules the two systems are similar, creating what I feel is the best ‘fog of war’ effect of any system out there.

I met Tim at Historicon last year. He is a fellow Piquet Field of Battle (by Brent Oman) player and became an honorary Hofkriegsrat. Hoffriegsrat I hear you asking. For Historicon 2009 a group of us crazies (under the leadership of head crazy Peter Anderson) got together and ran 6 1809 games culminating with a massive Wagram battle.

I also played in a General Quarters III game. I managed to get my two British Cruisers reduced to smoking, sinking scrap metal. I’ve played the GQ 3 rules a couple of times and really like them – but then I don’t really know much about naval warfare.

The last game I played in was Tod Kershner’s “Great Redoubt” game. Tod is the author of the Warfare in the Age of Napoleon rules. I had a small Russian cavalry command (2 Cuirassier and 2 Hussar units) on the right (north) flank of the redoubt. Between myself and the player on my right who had a brigade of Dragoons we managed to clear all of the French Cavalry off the table. I enjoyed the game, I always enjoy routing French troops.

I still prefer the Field of Battle for Napoleonic battles. At this stage in my gaming career I find the “I go, you go” type of rules a little gamey. As I reflect back on my time as a Tank Company Commander I never new for sure if my Lieutenants would show up where they were suppose to when they were suppose to and I feel that the Piquet system does the best job of representing that uncertainty.

Other than the above I schlepped some lead and provided morale support for two of Peter Anderson’s Field of Battle Napoleonic’s games (both of which won PELA awards).

As always there was lots of eye candy with some truly stunning game setups. Below are photos of some of the tables that caught my eye. Unfortunately, I didn’t manage to play in any of these.  The first 3 were part of the 'Uncle Duke' games, the last 3 are from a Space 1889 Cloud Ships of Mars using scratch built 25mm ships.

All in all it was a good convention, good gaming, and good seeing old friends. 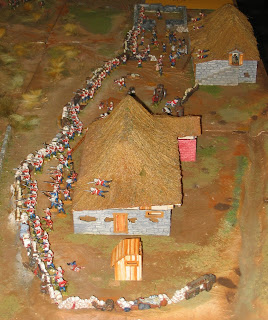 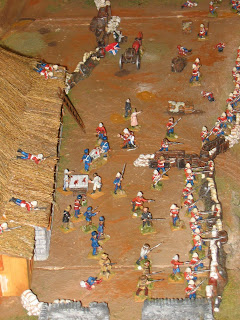 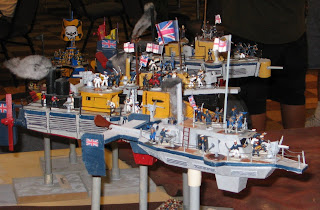 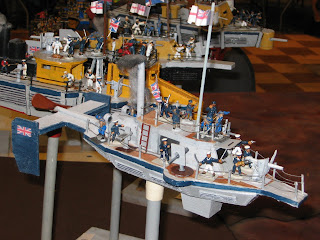 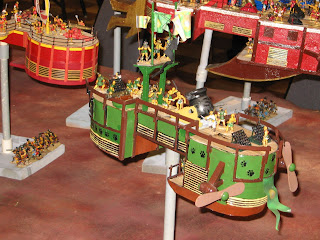 Time to take the plunge

While I consider myself a historical gamer, I guess it’s time I joined the modern era and tried one of these blog thingy do-hickeys. Hopefully this will keep me focused and help me work through the occasional painting block.

Periods that will be covered are primarily Napoleonic, Renaissance, World War II, maybe eventually some American Revolution (I’ve got to either start painting the pile of 40mm figures or sell them, I’ve been tripping over them for 2+ years now), Ancients and maybe some Victorian Science Fiction (I know, it isn’t historical – but the back ground is cool). From time to time I may include some snippets from the Imagi-Nation Napoleonic campaign being played by an eclectic group of us comprising wargamers from Australia to the U.K. I’m sure there will be other eras covered as well given that I have the attention span of a gold fish with ADD.

Stop back, I promise the posts will get better.