There Be Cossacks Here!

Greetings, I hope everyone is staying safe and making the best of your time under house arrest.

I finally finished what I thought was my last unit of Cossacks.  As luck would have it while digging through the lead pile hoping I had 2 left over Hungarian Knights laying around I could use to make up a full unit, I stumbled across another pack of Cossacks with Bows and Lances.  Huzzah!!  So there should be one more Cossack post.  The only down side with these are the torso and legs are separate so you have to glue them together (I hate gluing figures together).  Once the recently discovered Cossacks are painted I should be good for the new campaign although I guess it is possible given my troop rosters I could still need more Cossacks than I have painted, but unlikely. (yes, I realize I just passed on a bit of intelligence to the other players).

This round of painting production is a little more eclectic; as I dug deeper into the lead pile, back to around the 2008 layer of lead I think.  It kind of makes you feel like an archeologist as you dig down deeper and deeper into the lead pile like going through the various layers of your purchasing history – mumbling to yourself ‘why the hell did I buy this crap’.

But enough with the words, on with the pictures – hopefully Blogger will actually show them.
After looking at the photos, I think I need another coat of matt varnish on these, as I recall when I did the magic wash I used straight Future Floor Wax instead of thinning it with water like I normally do. 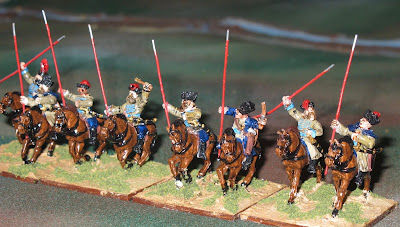 I couldn't get decent photos, at least not with my camera.