Wow, it’s been a while.  So, it’s a New Year and I seem to have developed an uncharacteristic streak of painting motivation.  While it’s not much to brag about, given my abysmal painting productions last year, it’s still a major win.

But, enough talk, on with the photos.

First up, some generic French Infantry in great coats.  This is the first of 4 planned battalions that will make up part of Compan’s Corps in the 1812 invasion of Russia.
Being Cheeky Frenchmen, they refused to stay in focus for the photos – actually probably for the best, it’s been so long since I painted something it’s like learning how to paint all over again.  The figures are Old Glory.

Next up, one of those troop types you can have too many of (If  you’re a Russian Napoleonic player).  In putting together my troop roster for our local campaign (https://pancerni-fishtales.blogspot.com/2019/03/2019-imagination-campaign.html ) I realized I needed a lot more Cossack units.
For the campaign we’re using Theatre of War, a Piquet Campaign System by Brent Oman for the strategic stuff.  While I’m probably woefully understating how it works, as I’ve never used it before, basically you have a fixed Roster of units that you randomly ‘draw’ units from for each battle.  In looking over my troop roster, it occurred to me that it’s entirely possible I could field a formation comprised of nothing but Cossacks and Artillery, so more Cossacks are called for.
These troops will also see duty with my ImagiNation ‘Otherwhere’ campaign if I ever finish the #$%^ map.
The figures are old Glory, armed with Sabre and Pistol, and if you look closely a couple of bows as well.

Interesting I just noticed the color difference in the walls 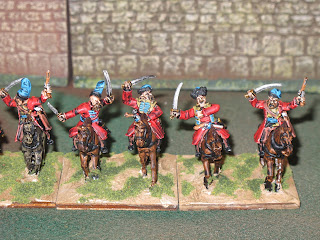 And here we have some RalPartha Crossbowmen based as skirmishers.  These fine fellows are slight in stature compared to the more ‘modern’ sculpts, but the price was right at Historicon many years ago.  They will  see double duty with my Renaissance armies as well as with the ImagiNation ‘Otherwhere’ campaign. 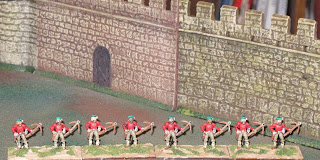 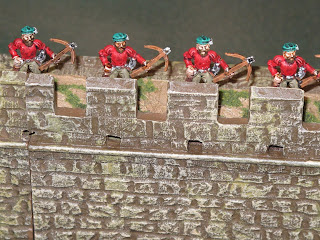 And finally, one of those units you paint just because you want to, not because you expect to ever use it, a unit for ‘In Her Majesty’s Name’.  Below you see one of the evil minion of the vile Dr. Loveless, one of his electric powered Dastardly Armored Lightning Equipped Killers, or DALEK. 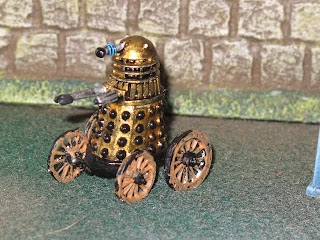 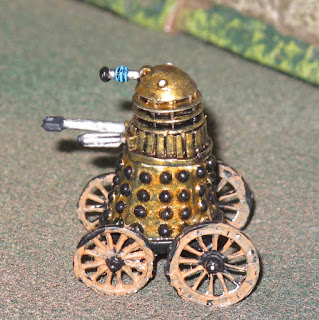 He would be electric powered, similar to the Electrro-Trike in the rule book, but of course with heavy armor, his own Arc Generator, an Arc Cannon, and a loudspeaker that allows the size challenged operator housed inside the infernal contraption to blare out ‘EX-TER-MIN-ATE, EX-TER-MIN-ATE, EX-TEERRRRRR-MIN-ATE!! 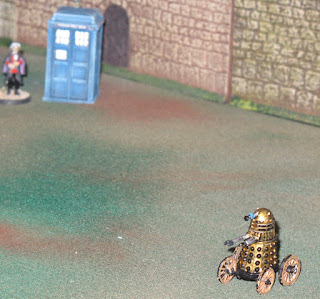 I’m still not happy with how the wheels turned out, and I see they need a little touch up on the paint job as well.  I went with the old west Stage Coach approach of smaller wheels in front and larger wheels in back, (I knew all that left over 15mm Napoleonic artillery would come in handy).  I also thought the wooden wheels helped set the whole tone, (once I clean up the paint job).   The Figure is the Black Tree Design Engineer, although I did find a box of FASA Dalek’s (probably from the 1980’s) as well when I was going through my ‘classic’ Dr. Who lead pile.

Hopefully the painting motivation will last, I have at least 2 more Cossack units I need to paint.