Earlier this year for our Anniversary the Czarina and I opted to vacation in Bar Harbor Maine, vs. our usual destination.  It had been over 20 years since our last visit ‘up there’ and the town had certainly changed a lot.  But even more importantly, on the drive up, we passed a little sign on the highway that said ‘Fort Knox’ and an arrow pointing to the left.

Fort Knox?  As a former Armor officer, I have some familiarity with Fort Knox, and while I haven’t been there in almost 35 years, I’m pretty sure it’s still in Kentucky.  The Czarina graciously agreed to stop.  Unfortunately the Fort itself was closed for maintenance on the stone work, but we were able to walk the grounds.

Fort Knox is located on the Penobscot River near Prospect Maine in an area known as the Penobscot Narrows.  The region had strategic value as the it was a mjor source of  timber for ship building, and allowed easy access to Bangor.  During both the Revolutionary War and the War of 1812 British forces seized the area and occupied Bangor and Castine.  The region is also the sight of the worst American Naval defeat prior to Pearl Harbor, where the Colonial Penobscot Expedition of 1779 attempted to force the British from the region. The American’s  lost 43 ships and approximately 500 men.  (Bonus question, what American Patriot famous for getting arrested on his midnight ride was court martialed for his role in the American Land Forces debacle phase of the Penobscot Expedition? He was ultimately found innocent after Ben Franklin was rumored to have intervened on his behalf)

Originally approved in 1825, Congress failed to fund construction until 1844, with the construction of the gun batteries closest to the river.  In 1853 work began on the granite walls for the central fort building. 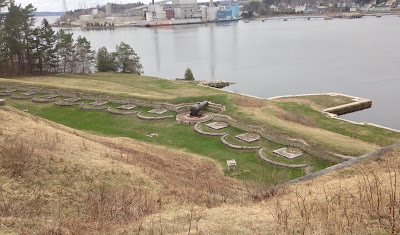 "A" Battery
The large gun in the center of the battery is a 15" Rodman.  It fired a 330 pound shell or 450 pound solid cannonball. With a charge of 100 pounds of gunpowder it could fire a solid cannon ball up to a range of 5,579 yards or just over 3 miles. 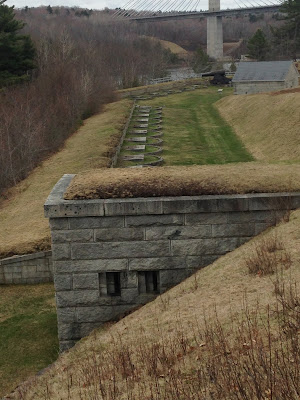 The Fort was garrisoned by 20 – 55 troops during the Civil War.  The fort was not yet completed and the troops were forced to live in temporary wooden buildings.  During the Spanish-American War, approximately 575 troops from Connecticut lived at the fort for approximately 1 month.  As the Fort was still not completed they lived in tents.  As you may have guessed the Fort was never completely finished before it became obsolete.

And now for something completely different…

That was last spring.  Now fast forward 6 months, and we’re into fall, and the leaves are doing their color change thing, below are a couple of photos of the backyard of the Summer Palace before it’s covered in snow. 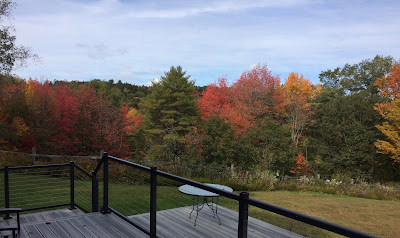