Well, it’s been a while hasn’t’ it.  Now that summer finally arrived here in the ‘Sportsman’s Paradise’ hobby time is at a premium.  Still I managed to complete the below two units.  I still have a couple more that I need to paint up before I can play out the next battle in the Outlandishian Chronicles.

But I think I need a break from this era.  It’s time to go back to the ‘true’ wargaming era, and I have the perfect unit waiting to be primed.  Stay tuned… who knows I may actually finish them/post them before the end of the year.

I also really need to find time to do more background work on Super-Secret-Squirrel project 'X', which just may be the dumbest thing I've ever tried.

First up, a unit of Longbow men.  These will join the ranks of the Earl as he desperately tries to 1) keep what he has left of his realm, and 2) take the battle to the Count to retake his lost towns.

Figures are from Crusader, War of the Roses range

And a slightly different view

And lastly a unit of Medium Cavalry.  This will be one of the Mercenary units I rolled up for the Earl.  Hopefully, they perform better than his Northern Barbarian Mercenaries did in the last battle.

Figures are Old Glory that I found rolling around the bottom of the lead pile, I think they're  Bosnian Cavalry from the Eastern Renaissance range 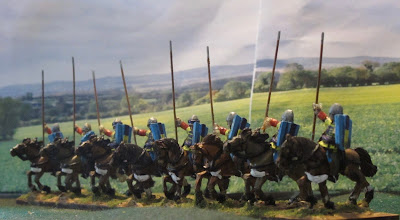 That it for now.  Hopefully the next post happens quicker than 4 months.