It’s campaign season again in the land of Outlandishia.  When last we left our heroes, the Earl was frantically rebuilding his thrice shattered forces and dipping into his treasury to hire some decent mercenaries this time. The Earl has obtained the services of 2 units of Dense Shock Infantry from the fallen Roamer Empire, as well as siege engine.  (These are the best units in the Earl’s forces).  He has also managed to rebuild his Extra Heavy Cavalry  which was obliterated in the 2nd battle of Bridgeton.   (Unfortunately they rolled… “poorly” for their unit stats.  I rolled 9 times on 3 different D20 dice and the highest roll was a 5 giving the Extra Heavy Cavalry a base die of a D4.   Clearly the dice gods do not favor the Earl and that unit is cursed.  Although given the unit was vaporized in it’s last battle, I guess the poor quality makes sense).

Meanwhile in the City of Wander the Capital City of the (once great) Empire of Roamer Dictator Serious Smackdownum was counting the bags of gold that the Earl had paid for the use of his troops.  “That foolish old fraud, paying me to give my Legions battle experience.  If the Count doesn’t kill him, he will rue the day I launch the campaign to restore  the Empire and bring these upstarts to heel”, he cackled as let the gold coins rain down on his head.  “The Intelligence General Bigus Dikus learns on their fighting styles will be well worth any loss of blood for the coming crusade.”

The Count spent the off season consolidating his gains.  The Count was able to take control of the now isolated village of Maizeland without a fight, simply by reducing their taxes by 50% from what the Earl had been levying, oh yes, he may also have threatening to burn the village to the ground and sell every female child to the Northern Barbarians if they refused he offer.

The Spring thaws have abated somewhat, and the Earl seeks to gain a march on the Count and retake Muscato and teach those disloyal upstarts in Maizeland a lesson.  Unfortunately the Count’s light cavalry patrols have spotted them, (rolled a 20 on a d20) and the Count has just finished consolidating his troops at the scene of the last battle as the vanguard of the Earl’s forces come into view.

The table is laid out.  To the left (North) are the forces of the Count, and to the right (South) are the advancing forces of the Earl.  The Earl’s plan is simple… ADVANCE!, and hope his crossbows and bows can whittle down the Count’s forces.  The Count plans to hold his center and hope his firing does the job, while he smashes the flanks.  Given how outlandishly abysmal shooting has proven to be so far in the campaign, I can’t believe either of these bozos would put any faith in shooting.  We shall see. 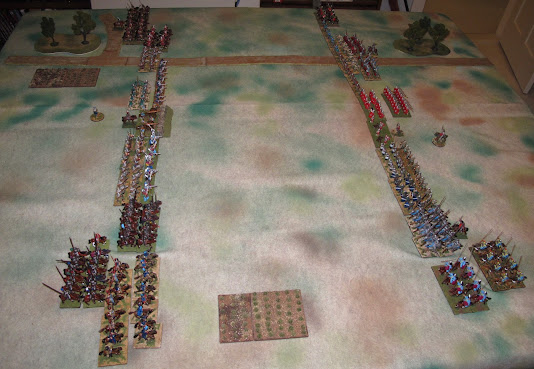